Julie Grigio is the daughter of General Grigio and his deceased wife Audrey.

As stated in the novel, Julie was 12 when her mother left them and died by giving herself to the zombies. This caused her father (General Grigio), to become less affectionate, which lead to Julie's hardened personality.

When she's at high-school she fell in love with Perry Kelvin and dates him, though their relationship they face challenges after Perry's father died.

At nineteen years old, she faced a world of constant danger and horror with cool resolve and sarcastic wit. She considered herself as nothing special, but when she was captured and brought into the zombie world, it was her fiery nature and overflow of life that sparked the beginnings of change in R, his fellow zombies , and the rest of their dying world.

Julie Grigio is portrayed by Teresa Palmer in the film. She has wavy blond hair, blue eyes, and fair skin. She is a very beautiful young woman, as she was able to win the affections of R, a zombie. Eventually, R's feelings for her grew to romantic and he eventually became human again.

Julie is described as being headstrong and tough as nails, but before the Zombie Apocalypse it was said that she was a lighter version of her self now and that she was very caring. Julie has a fire in her that couldn't possibly die. She's a fighter.

Being a child of the apocalypse, Julie was raised without ever knowing what a normal world looks like. She has lived through too many tragedies to name, and these experiences have forced her to harden, but also to grow a sense of humor.

Julie and Perry started dating when they were in high school. Perry became more distant with Julie after the death of his father (he became a victim of the zombie infection in the movie while he crushed by construction in the novel) and became more focused on killing zombies rather than being with her.

Julie mourned him after his death by R, and still loved him despite his passing.

Julie met R during a zombie attack while out searching for medicine for the other living. Unknown to Julie, R had killed her boyfriend Perry and eaten his brain, absorbing his memories altogether. He became fascinated with Julie and saved her from being killed by the other zombies and took her back to his home plane in the airport.

He kept her safe from the other zombies and started to become more humanized under her influence, eventually falling in love with her. Julie later left him while they journeyed back to the humans' hideaway stadium after she found out he killed Perry, but she later forgave him for the action.

When the Bonies began hunting them, they tried to get General Grigio to understand the situation, but he remained bent on killing R, causing the two to run. However, after R saves Julie from the Bonies, he turns human again and becomes her boyfriend. 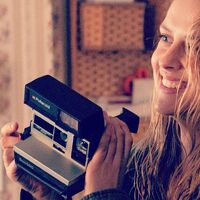