R is the main male protagonist of the film, based off the character of the same name in the novel.

R is a young man in the thick of a serious existential crisis — he's dead. But like every other lifeless person in his grim new world, he's still walking, grunting and attacking humans. He doesn't remember his old life, who he is or where he came from; nothing at all but the first letter of his name: R.

At some point, R died and reanimated as a zombie. He found his way to the airport, where he lived in an abandoned airplane and hoarded any interesting object he could find, from records to bobble heads. He spent his days wandering, groaning, staring and attacking humans. But he is now lost in the empty world around him, detached from humanity and life. It is soon revealed that he yearns to be something more. He romanticizes about the days when people thought, loved and lived. He gets his chance when he meets Julie Grigio, a living girl who slowly changes his entire existence, and the existence of all of his kind.

R has speculated that he was probably unemployed before the outbreak, due to the way he dresses. The life before his transformation is ultimately unknown, and probably will remain to be so.

R acted as a singularity in the cure of the zombie apocalypse in the Warm Bodies universe, where Julie acted as the trigger or catalyst. This is true for both the book and film versions, in which love itself is the driving force behind curing the undead to become to alive once again. Issac Marion presents love in both a literal curing agent in the book, however metaphorically this can be seen love can cure us of the emptiness we feel in life, as if we feel "dead". R explains at the beginning of the film, how he feels "lonely and lost".

In the film, R is portrayed by actor Nicholas Hoult. He is a zombie of average build suffering from only mild decay, with dark hair, pale scarred skin and gray eyes. He wears a red hoodie on top of a gray t-shirt, and blue jeans. Like all zombies in the movie, he walks stiffly and with a distinct shuffle. He is described as looking to be in his late teens or early twenties by Julie's friend Nora. In the book, however, he was described the same as he is in the movie but wearing a suit not a hoodie and jeans. And him and M were more "friendly" and active towards each other in the book. M would play with R's hair and grunt which would mean "girly."

R has a romantic, withdrawn personality. He imagines the world as it once was, and likes to picture the lives his fellow Dead once lived. His thoughts are deep and ironic, but because he is Dead, he has trouble expressing himself. He wants to be more than a simple-minded zombie, but only manages to fulfill his desire when he meets Julie, a strong and witty living girl. He quickly becomes protective of her. His feelings eventually transform into love.

Despite R's status as a zombie, he exhibits many human qualities through his behavior, and actions.  R seems to have an active love for music, and is rather intelligent. He enjoys collecting vinyl music tracks because of their superior quality, which indicates he may or might have been an audiophile (someone who loves high definition sound/music). R's residence in the aircraft give many clues to his character traits. Of all, however, his kindness, caring, and protectiveness seem to be his most defining qualities as he is able to rise above his viscous tenancies as a zombie.

R from both his comic and film interpretations has been described to face an existentialist anxiety concerning with both his existent, and overall feeling lonely and lost. This gives him very grounding and human like struggles that most normal people face. In this sense, Julie is solely responsible for giving himself a sense of direction back. In one scene from the film she asks him, "So what do you want to be R? "You can be anything."

R meets Julie Grigio whilst hunting for food. He kills her boyfriend, Perry, and consumes part of his brain. He gains Perry's memories and, with them, his intense feelings for Julie. R recognizes her from Perry's memories, and in an instant of indecision, rescues her from his fellows and brings her back to the airport where he lives. At first, his relationship with Julie is fragile. He keeps her safe in his airplane, and helps her to find food. They bond over records, and as Julie becomes more trusting him, R introduces her to a existential side of zombies she never knew existed. They eventually develop romantic feelings for one another, and over the course of the film, R transforms from a zombie into a kind and gentle young man.

During the novel, while shuffling through the airport in which R resides, he encounters a Dead woman who is around the same age as him. She is described as being attractive (for a corpse), curvy, very early in the decomposition, and wearing a white shirt, black skirt and name tag (which R attempts to read but fails). Through a former-human instinct, she takes R's hand and she and him progress through their relationship (within minutes) and are soon heading towards the wedding alter - constructed by the Bonies - to get married. They are then offered two corpse children. Eventually she and R's marriage begins to crumble, as she has a very short memory (seeing as she is a corpse) and forgets him. She is also seen attempting physical relations with a male zombie after she forgets R's existence. 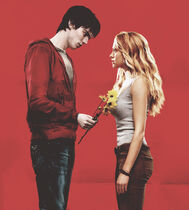 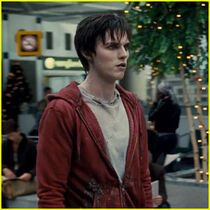 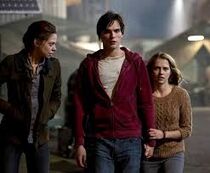