Adelaide born actress and model Teresa Palmer has gathered some impressive film credits. Teresa completed high school at Mercedes College in 2003, where she was a popular student who was well-known for her practical jokes.

She worked in a Cotton On outlet in Rundle Mall until she was discovered and cast on the spot - without an audition - in her feature film debut and breakthrough role in 2:37 (2006). Made by first-time writer/director/producer Murali K. Thalluri, the film competed in the 2006 Cannes Film Festival in "Un Certain Regard" and chronicles the lives of six students over the course of day and ends in a devastating suicide.

Teresa immediately went to work on back to back film projects including December Boys (2007) opposite "Harry Potter" star Daniel Radcliffe; a coming of age story about four adolescent orphans, based on the book by Michael Noonan and directed by Rod Hardy (Robinson Crusoe (1997), Buffalo Girls (1995) (TV), "The X-Files" (1993) and "The Practice" (1997)).

Teresa also stars as stripper-turned-criminal "Dale" in the British/Australian co-production Restraint (2008), a film noir/psychological thriller which follows the plight of a pair of I'll fugitives on-the-run from a murder scene. Directed by David Denneen, the film also features former Calvin Klein model Travis Fimmel and British actor Stephen Moyer. In 2006, Teresa worked with Japanese director Takashi Shimizu on the Sony Pictures production The Grudge 2 (2006). Set in Tokyo, the horror sequel to the box office hit The Grudge (2004) also stars Sarah Michelle Gellar and Jennifer Beals. Later that year, she signed on to play the female lead in Doug Liman's action fantasy film Jumper (2008), but was subsequently replaced by Rachel Bilson.

In 2007, she saw her star opposite former real-life boyfriend Topher Grace as the love interest in the retro comedy film Take Me Home Tonight (2011). Shortly after filming ended, Teresa decided to move permanently from Adelaide to Los Angeles following a public split from her then-boyfriend of two years, Australian Rules football star Stuart Dew. Teresa was due to play a small part in George Miller's doomed superhero film "Justice League: Mortal", but the production fell through after months of problems. Teresa briefly dated her "Justice League: Mortal" co-star Adam Brody in early 2008; later that year, she had a relationship with British comedian Russell Brand, whom she met on the set of her latest film, Bedtime Stories (2008). "Bedtime Stories" is a Disney children's comedy starring Lucy Lawless, Guy Pearce, and Keri Russell and was released on Christmas 2008. As of January 2009, she is back with former on-off boyfriend, Topher Grace, and soon to star in an advertising campaign for Australian clothing chain "Just Jeans". She plays Julie Grigio ‎in Warm Bodies 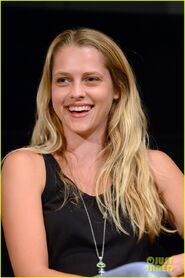 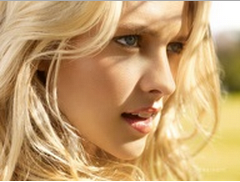